Late in April 2018, Nicole Perez, a resident near Tappan Lake in Harrison County saw a red fox carrying what she believed to be a kitten. The fox dropped the kitten, and she took it to her local veterinarian where they identified it as a bobcat. After stabilizing the kitten, they called the Ohio Division of Wildlife (ODW). The ODW told her to bring it to the Kevin P. Clinton Wildlife Center at Penitentiary Glen Reservation, at Lake Metroparks. The mission of the Kevin P. Clinton Wildlife Center is to relieve the stress of human impact on wildlife populations through education and wildlife rehabilitation. Their goal is to return healthy wildlife back to the wild.

Wildlife Center Manager, Tammy O’Neil and her team have cared for the bobcat over the last year. “The kitten was the smallest received to date, weighing in at ½ pound, and around a week old,” Tammy said. “The kitten was very weak and thin and small for its age. After vet examination, it was determined he was healthy, just needed to put on weight.” Feedings were around the clock every two hours. Each day he grew stronger and development was normal. After a month’s time his weight tripled and by the middle of May he weighed 2.2 pounds.

Bobcats are a predator in Ohio, so safety was top priority for staff at Lake Metroparks, and for the bobcat. This includes making sure the bobcat does not become habituated or imprinted on people. If a bobcat in the wild expects humans to feed it or is not afraid of humans, the end result will be detrimental to the bobcat. As soon as the bobcat is eating enough on its own and maintaining his own body weight, he was moved to an outside enclosure.

He quickly adapted to being outside and had plenty of room to climb and run. He was kept in the intermediate enclosure until all his vaccinations were up to date and enough natural behaviors were observed to move him to his final, larger enclosure to prepare him for release. 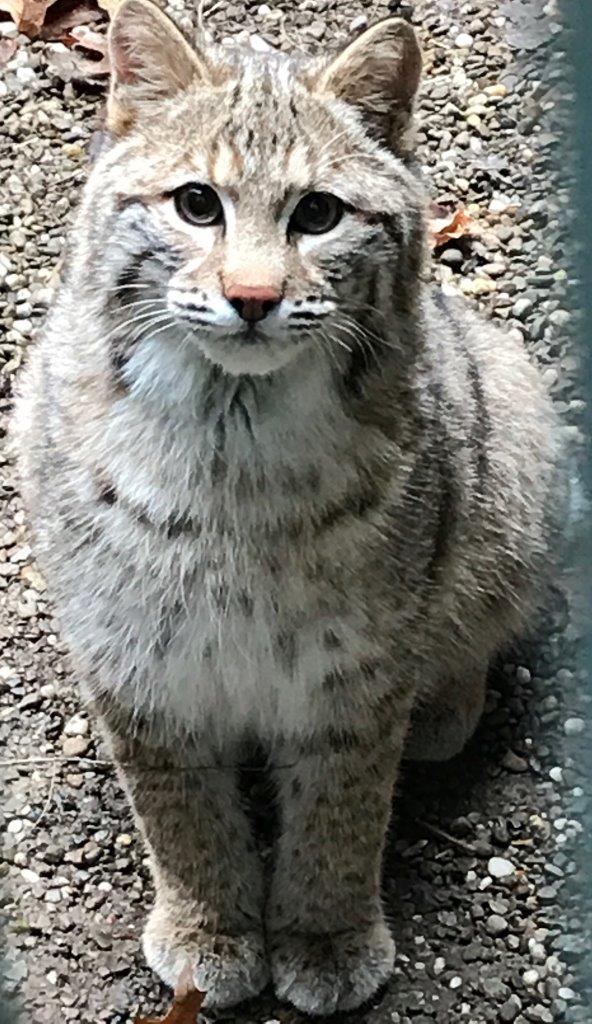 On May 31, 2019, MWCD, Lake Metroparks, along with Nicole Perez and her family, all hiked to the location where he would be released back into the wild. The desired location was to be an area near his rescue. After consulting with staff from the Muskingum Watershed Conservancy District (MWCD) a location near Clendening Lake was determined as the ideal release site. “We're on a 350 Acre Peninsula here; nothing else around but the lake on the edge. He's going to have a lot of area here to explore," said Muskingum Watershed Forest Operations Coordinator, Clayton Rico. After cautiously stepping out of his cage, he paused for a look back at his caretakers, and disappeared into the tall grass.

Video from WTOV-9 shows footage from the release can be seen here: